The most important caregivers for the 6- and 15-year-olds were also included in the survey; the parent who does the most supervision and spends the most time with the child (principal caregiver) as well as the most important instructor, such as the kindergarten teacher or main class teacher.

The two younger cohorts were interviewed every three years within the framework of the representative longitudinal study. Additionally, further survey data was collected both shortly before and after important transitions, such as school entry or the start of an apprenticeship. This takes into consideration that not necessarily all children and adolescents of the same age undergo important transitions at the same time. 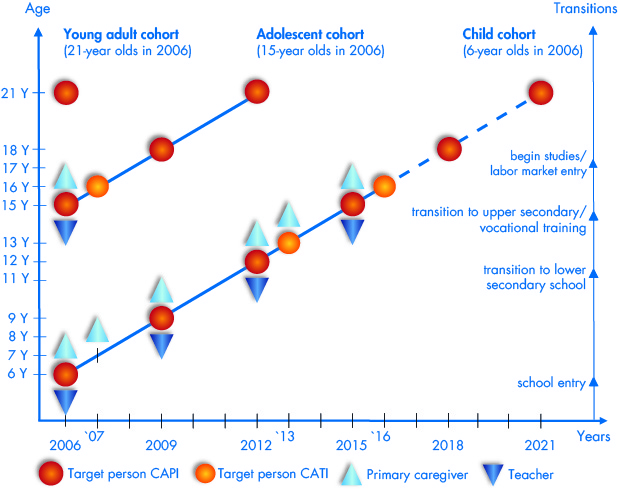 In the representative study, a two-step process was used for sampling. In the first step, municipalities were chosen. In the second step, children, adolescents and young adults in the chosen age groups were taken from the corresponding resident registers. This two-step process was also used for the sampling in the intensive study, whereby the choice of municipalities was not carried out according to representative criteria.